Completed in November 2020, Montreal’s Turcot Interchange is the largest road construction project - and first carbon-neutral infrastructure project – in the history of Quebec, connecting three highways through four interchanges, 45 bridges and viaducts and a cable-stayed bridge over the Lachine Canal. 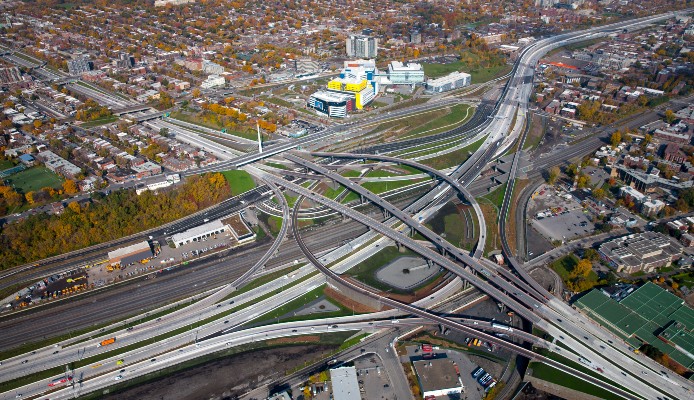 A project of this scale – which took over 1,000 construction workers to complete – was a massive undertaking, requiring a vast quantity of materials, which had to be produced and delivered to the site in a timely manner. The new interchange had to be constructed with minimal impact on the environment and while keeping the existing road infrastructure open to the up to 300,000 vehicles that pass through every day.

Our Demix companies – including Demix Construction, Demix Agrégats and Demix Béton – within CRH’s Americas Materials Division in Canada were involved in the project from the start in 2015. The interchange required huge quantities of materials, including two million tonnes of aggregates, 150,000 cubic metres of structural concrete and 135,000 cubic metres of concrete paving, as well as 120,000 tonnes of asphalt for construction of the ramps and related municipal network.

To maintain traffic flow during construction, the old interchange had to be demolished while the new one was being built. As the existing structure limited the work area, including the clearance height, innovative techniques had to be used so as not to damage the new interchange during demolition.

To balance out the project’s carbon emissions, 70,000 trees, shrubs, perennials, grasses and vines were planted along the interchange. Facilities for sustainable modes of transportation were also designed, including several multipurpose bike paths and dedicated traffic lanes.

The completion of this project saw the creation of a modern, ergonomic, aesthetically pleasing and environmentally friendly transport hub for the city of Montreal, which will be of service to residents of the city for decades to come.