Among the top attractions in the city of Budapest are its world-renowned spas, which have earned the Hungarian capital the nickname “spa town”. While the bathing tradition itself is 2,000 years old, the still-functioning bathrooms of Budapest date mainly from the period of Turkish occupation in the 16th and 17th centuries. 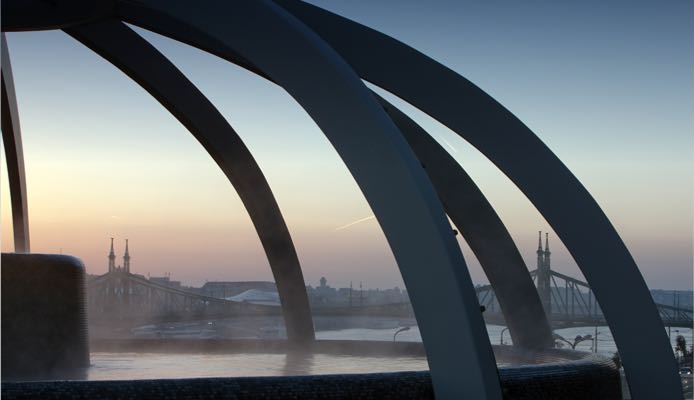 In 2014, the management of the Rudas Bath decided to renovate the spa, in order to maintain its attractiveness for visitors. In addition to upgrading the façade, the bath got four new swimming pools, saunas, a restaurant and a café.

While upgrading, it was important that the centuries-old features that make this building so iconic, in particular its façade, were enhanced while retaining their traditional character.

To achieve an optimum blend of modernity and tradition in appearance, the bath’s façade was upgraded with oriental-style concrete elements. Those were made from CRH White Cement which is produced by CRH (Slovensko) a.s. in Rohožnik and distributed to over 20 countries in Europe. White cement is distinguished by its bright white colour. Furthermore, when concrete produced with the CRH White Cement is dyed, the pigmented concrete elements appear much more brilliant than is possible with its grey counterpart, making it the perfect choice for the Rudas Bath project.

The snow-white concrete elements are designed with a girih décor, giving the façade a timeless, aesthetic ornamentation commonly used by the inhabitants of the Ottoman Empire.

The renovation work lasted a year, but was well worth the wait. In addition to the enhanced level of comfort offered to patrons by the new facilities – including a stunning new roof terrace – locals and tourists can also admire the striking exterior from afar.